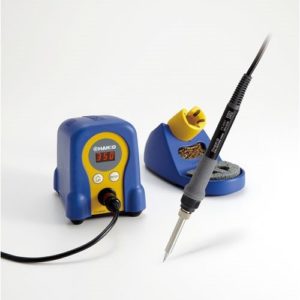 The Hakko FX888D is the updated digital version of the ever-popular Hakko FX888 soldering station. It does include several new features: usable, selectable preset temperatures, digital calibration, and operation of password protection. So, if you’re setting this up in a process environment and you do not want your operators fiddling around with the temperature, you can lock them out. Have them set at only one soldering temperature. 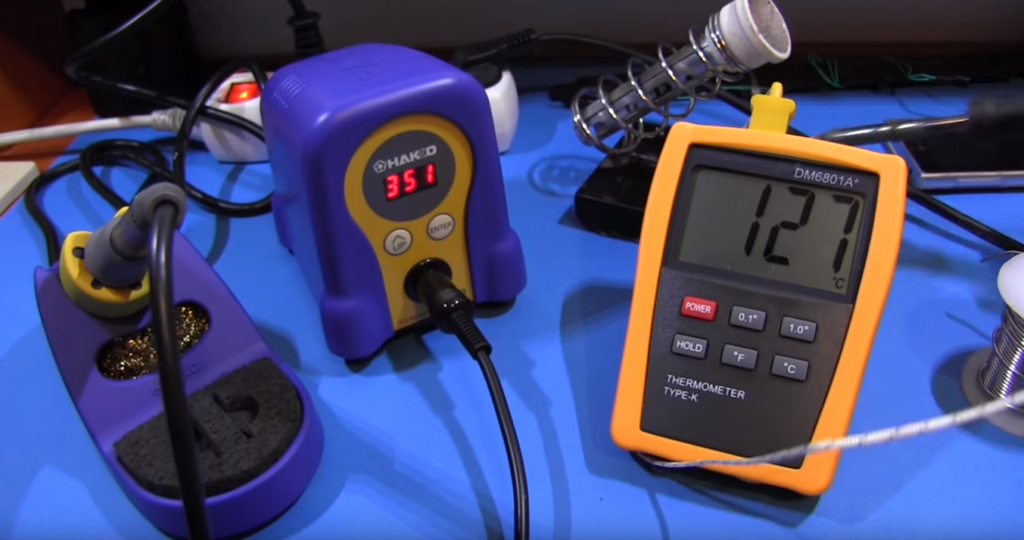 It also has a low-temperature alarm. If for some reason it is below temperature, it will sound an alarm, and that’s to protect against any cold solder joints. But for those of you that have used the FX888, you know that its thermal recovery with 65 watts of power is rather impressive.

Let’s get into the tech specs right now. 65 watts of power. Best out there for a unit of this size. 65 watts of power will give you great flexibility as far as leaded or lead-free soldering applications. The predecessors of the Hakko, by the way, was 42 watts of power, the old 936. This unit weighs 2.6 pounds, rather robust and has a ceramic heating element. That’s one of the things that aids in its thermal recovery, as well as a closed loop sensor for accuracy. And it is accurate from 120 degrees Fahrenheit all the way up to 899 degrees Fahrenheit, and it’s accurate plus or minus a hair under 2 degrees Fahrenheit. 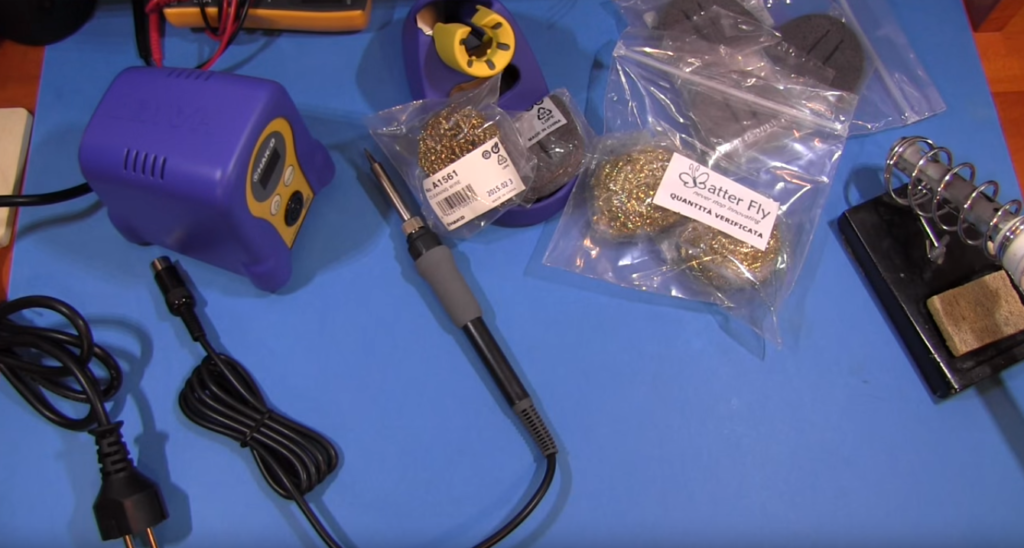 The pencil does include a tip. This is a T18 series tip. They go for around $6, a little under, a little over, depending on the geometry that you pick. And one other thing that was nice on the digital station is they do preset temperatures, so you can program in five preset temperatures if you so desire, and then rather than just holding the arrow to increase your temperature, you can just bounce through your presets.

What is the max output heat of this soldering station?

The new FX-888D soldering station by Hakko is a digital anti-static (ESD) unit that replaced the popular FX-888 model. The gadget provides quick heat recovery and precise temperature control. In addition, this soldering can perform with lower temperature settings.

The temperature power of the FX-888D station was increased by 30% compared to the Hakko 936/937 models. This iron offers the quick recovery of temperature when the T18 tips are used (they have high conductive features of temperature). This allows you to reduce the temperature regime of soldering, minimizing the negative thermal effects on the components and oxidation of the tip, thereby increasing its service life.

According to the list of technical characteristics, the maximum temperature range of the FX-888D unit is 8990F. This model is equipped with a smart digital display that enables the checking of the preset temperature settings. This particular device has the Preset mode for personal customization and storage of 5 (preset) temperatures. The use of Preset modes allows switching the station’s temperature for different works demanding certain temperature conditions and performance. So it is the maximum output heat of this device.

The FX-888D by Hakko has the ESD control unit, under the digital display. The display has one 2 buttons: “Up” and “Enter”. The temperature presets are intuitive and very simple. Even if the user has not used any Hakko soldering stations before and there is any instruction nearby, it is very easy to understand how to pre-set the required temperature mode.

The soldering iron can increase the temperature up to 6600F in 20 seconds. The temperature range decreases gradually. Compared to similar units, the FX-888D allows reducing the soldering time increasing the performance rates.

Is the iron removable? Can I use a micro pencil with this station?

Yes, one of the best things about this soldering iron is the removable iron’s tip. It can be interchanged with many different tips. Also, the handpiece of the FX-888D can be altered as well. But be careful – when you remove the handpiece it won’t work with the micropensil. You should try the FX-951 station to use the handpiece and micropensil. By the way, according to the feedback, a Hakko FM2032 micropensil is fully compatible with the FX-888D iron.

Is the tip coming with this soldering unit a great choice for an amp build? Does Hakko offer a better option of tips?

For other SMD works, consider using other tips. For instance, some users recommend using the Plato tips (they are also compatible with the Hakko 900M). According to the user reviews, bent hooks will work as the basic tip for soldering SMD chip components. A narrow chisel tip can also do this job.

If you are looking for the best alternative tip options for the FX-888D station beside the genuine tip, consider using bevel and chisel models.

For instance, you may try the brand Hakko tips:

The official Hakko website recommends using all these tips for drag soldering.

Is it good for soldering stained glass?

This particular soldering iron can be used for stained glass. Just keep in mind that you should start soldering at the decreased temp range. Slowly increase the temperature range until you get the expected result.

This Hakko iron’s temperature range is 392°-896°F. However, the manufacturer recommends using this unit only for general electronics projects.

What are the alternative irons for stained glass works? Soldering experts advise using any stable 100 Watt+ iron/station with a thick chisel tip. In fact, any automatic temperature-controlled iron will do the work. You should choose a broad and thick tip for the best heat flow. By the way, the Hakko FX601-02 can maintain a consistent temperature.

The experts who are into soldering for many years claim that the FX-951 and the FX-888D by Hakko are pinned in a different way. FX888D has a 5-pin DIN, while the FX951 model is a 7-pin DIN. That is why these models are not interchangeable.

If you are looking for the replacement, consider choosing the tip of the soldering iron 900M-T-H – it is compatible with the FX-888D model. Also, you may use the B1786 tip that should fit as well. However, the B1786 tip has a bit larger diameter that is why bend the tip’s end through the opening of the closure.

Does this soldering iron come with the cleaning wire?

Yes, the FX-888D gadget is supplied with the cleaning wire in a special holder. This wire is quite soft but if you stick the iron’s tip inside while the tip is still hot, the wire will do the job perfectly. The wire is really soft, you won’t actually even notice how smoothly it works. Unlike the ZD-929C model, where the wire is also soft, the FX-888D wire does not seem to break from pushing too hard.

Also, this model is supplied with a cleaning sponge. The only missing thing is spare tips of various sizes.

If you are going to connect the FX-888D iron to 230V/50HZ grid via a transformer, please reconsider! The FX-888D supports 70W/120VAC as the default power consumption settings, with the handpiece at 65W/26VAC. The power transformer of this soldering iron is limited to 60Hz. It may work at 50Hz but expect the transformer running hot or the internal fuse blowing.

Useful Video: How To Spot A Fake Hakko FX-888D 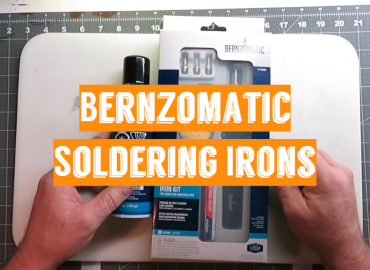 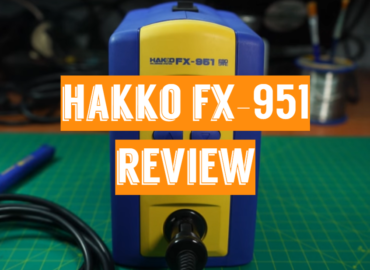 A standard soldering iron is usually a bit limited in its functionality. Most models do not have a temperature adjuster, and you will not be able to turn off the soldering equipment by pressing a button. Features of Hakko FX-951: Wattage: 65W Voltage input: 120V Heats up in 20 second [su_button url="https://www.amazon.com/AMERICAN-HAKKO-PRODUCTS-INC-FX-951/dp/B0012B8NW8/ref=as_li_ss_tl?ie=UTF8&linkCode=ll1&tag=solderingironguide.com-20&linkId=aa56c56458e96c5eeefb14fdcb8e6eaf&language=en_US" target="blank" style="flat" background="#ef922d"… 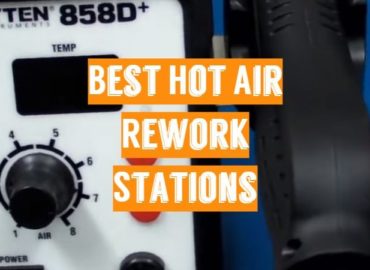 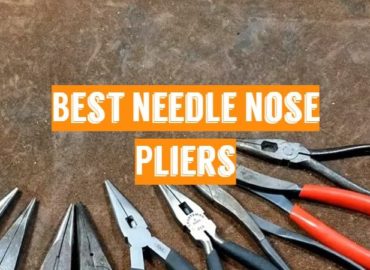